At the Discovery of Hunspach, Favorite Village Of the French 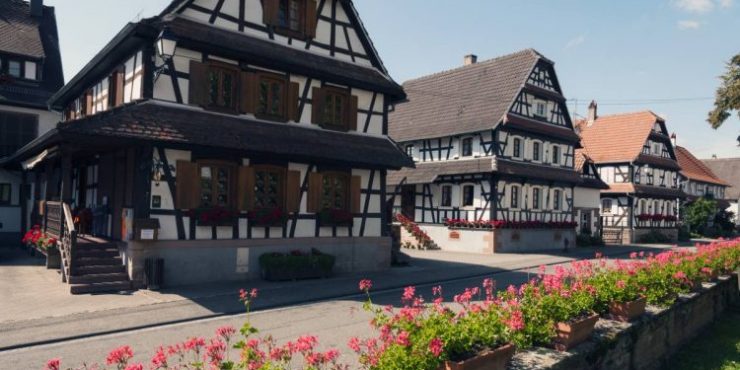 This year, the title of favourite village of the French was awarded to the municipality of Hunspach, located in Alsace. Let’s take the opportunity to discover this little gem of French heritage.

In this region that mixes France and Germany, the double influence is felt even in the Alsatian dialect, from which come many names of communes, including Hunspach. There, no French gastronomy but local specialties, including sauerkraut or baeckeoffe, served in traditional wintubs, small establishments that delight customers with their wine production that accompanies simple and typical dishes.

The french’s favourite village was therefore elected on Wednesday evening during the eponymous programme presented each year by Stéphane Bern. The results announced enthusiastically by the presenter should, according to the latter, increase tourism on the spot by at least 30%.

For Hunspach, this is the perfect opportunity to revive the weakened tourism activity after the passage of the Covid-19, even if the 650 inhabitants are a little afraid of being drowned under tourists. Sylvie Heiby, first deputy mayor, said: “We have put everything in place to welcome tourists in the best conditions. Alsace has been hit hard by the Covid, its image too, so seeing tourists coming back makes us very happy.”

Learn more about this typical little Alsatian village, festooned with geraniums, did it get the famous title of Favorite Village of the French? It seems that the inhabitants are taking advantage of the containment to promote their commune on social networks.

In terms of architecture, guide Béatrice Kehrli explained to Stéphane Bern during the show: “The white walls that make the charm of the village date back to the construction of houses in the 18th and 19th centuries. The lord of the time had opted for white, the natural colour of lime used to make walls, because it cost less than coloring the buildings.”

The television programme thus confirms the tourist attraction of Alsace. This is the third time a village in the region has won the competition, after Eguisheim in 2013 and Kaysersberg in 2017.

France 3 reports: “So far, the regions of France that have the most coveted title are Brittany (with Ploumanac’h and Rochefort-en-Terre respectively victorious in 2015 and 2016), Occitanie (with Cirq-Lapopie in 2012 and Cordes-sur-Ciel in 2014) and the Great East (with Eguisheim awarded in 2013 and Kaysersberg in 2017) .  On the other hand, the Centre and the Ile-de-France are among the regions for viewers to vote the least each year.”

Surrounded by the villages of Wissembourg, Betschdorf, Goersdorf and Lampertsloch, the town of Hunspach is located just a few kilometres from the Rhine and the German border. In the region, the road to picturesque villages meanders through the Lower Rhine and offers a striking glimpse of the wonders of the region. The route can even be cycled.

As in all of Alsace (“Elsàss” in Alsatian), the signs in Hunspach are written in both languages, a legacy of the region’s past, which has been passed several times in German hands.

Folk traditions are very much alive in Hunspach, as is also the case in the 850 or so Alsatian villages, spread between the Rhine Valley and the Vosges. The tourist office explains: “Through its architecture, costumes and traditions, Hunspach tells a part of the history of Alsace.”

Since 1985, the village is one of the most beautiful in France, displayed is part of the association Les Plus Beaux Villages de France.

Where to sleep in Hunspach?

The question is legitimate, as tourists will undoubtedly flock to the most beautiful village in France this summer. Hunspach has a rural cottage and other AirBnB-type accommodations. There is also a farm inn nearby, which seems just as pleasant for the taste buds as it is for comfort. Spending the night on the farm is also an opportunity to delve into the history of the mill of the seven fountains.

The wooded surroundings of Hunspach are also dense in hotels, where storks often nest on chimneys. To find the perfect accommodation, the interactive map of Visit Alsace will be your best asset.