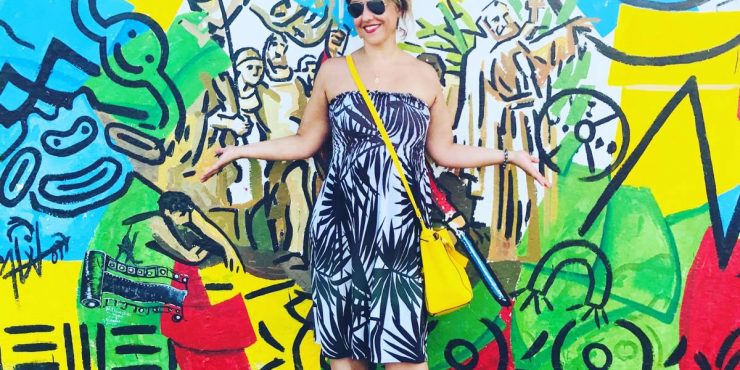 Smartphone in hand, the five senses awake, the smile of ears, the journalist Saliha Hadj-Djilani travels the planet to clear the destinations often explored, which were thought to be devoid of any mystery. His travel diaries for Beur FM or Le Petit Futé , one of the most widely read French publications, are rich in human encounters and stunning discoveries. The woman who, at the age of four, warned her world that travelling would be “her job”, managed to disorient us even during the confinement with the Saliha Podtrips. This summer, she’s giving us an appointment on RMC for inspiring morning columns.

You write for Le Petit Futé, one of the most widely read French publications on the planet. Is it now a challenge, more than yesterday, to take 2.0 travellers to the Atlas of the World? A world that has become just a click away…

SH-D: That’s a very fair point, but Le Petit Futé has always been very strong on digital with an avant-garde website that provides all the content of its free online guides and print guides still available in digital version. That’s why I love working for them, they’re always one step ahead of others and they’re often more creative and bold. During the confinement, for example, they had the idea to make guides “100 km around…” Paris, Nantes, or Lille, or 12 major cities in France, only in digital and completely free versions. And if they were able to do that, it is precisely because they have mastered the digital tool very well. What a bargain at a time when all bookstores were closed!

How can we design a country’s comprehensive guide when it comes to addressing gigantic regions like Russia, China or Australia?

SH-D: It’s a real challenge indeed… But a guide can not contain everything in reality, at the risk if not to pour into the encyclopedia and ultimately weigh down the backpack of the globetrotter! In fact, we focus on most of the tourist areas with some off the beaten track to find the real nuggets of the country. With this in mind, we ask the local authorities of the tourist ecosystem, but it is mainly with the inhabitants that we source: their contribution is invaluable. Another key element is letting your adventurer instinct speak for itself. The journey is like a coil of wire that you have to follow without really knowing where it will sometimes take you. Or the art of knowing how to get lost in order to better welcome discovery…

How do you really discover a place when you have a limited time on site?

SH-D: You have to organize yourself and have an itinerary, of course, but it is very important to make room for the unexpected and to keep flexibility in this route. Do not book all its domestic transport or accommodations in advance for example, just those at the beginning of the stay. So according to the encounters and desires, we can adapt more easily … Don’t try to see EVERYTHING, because it means doing things in a hurry. By taking the pulse of the destination, we leave the door open to the most beautiful experiences. That’s how I came up with the idea to launch my travel podcast channel “The Podtrips of Saliha” available for free listening on Soundcloud, Spotify, Deezer or Podcast Addict platforms. In practical terms, these are interviews about exciting people I meet on my journey and who will tell me about their country or several sometimes. They are true insiders and living travel guides.

A top 5 destinations to do once in a lifetime?

SH-D: That’s a tough question… After visiting some fifty countries, I can say that I am clearly focused on exotic travel, where we go to meet to live moments of sharing and emotions. I also like the unspoiled landscapes and paradise beaches, so according to these criteria, here is my top 5:

– Hawaii: For the beauty of its dreamy landscapes, its pristine beaches with turquoise waters, the telluric force of its volcanoes, and its unique culture, both American and Polynesian. The culture of native Hawaiians is reborn from the ashes and I really like that. Today a minority, this original people exterminated by Captain Cook in 1778 has its origins from the Marquesas and Tahiti.

– Algeria: Of Algerian origin, I regularly traveled to my parents’ country during my childhood. Later, I traveled its vast lands as part of the writing of the tourist guide Le Petit Futé dedicated to Algeria. Between the major Roman sites of Tipasa and Cherchell, the intact prehistoric engravings, the sublime beaches of the Jijel or Bejaia region, the cities with exceptional heritage such as Algiers, Oran or Constantine… And then this Sahara, the most beautiful desert in the world in my opinion, where one marvels at every moment. Algeria is a jewel with a thousand-year-old cultural heritage. Still untouched by mass tourism, visitors are always welcomed, hospitality is built into a true way of life.

– Cuba: Ah, what a small country and what an incredible story! Beyond any political considerations, how can we not be fascinated by this tiny Caribbean state that continues to stand up to its neighbour the United States… world’s leading power? Yes, not everything is rosy in Cuba, but they continue to help countries with a lot of doctors. We recently won with Italy hard hit by the health crisis. And then, more lightly, there is this Cuban music, salsa, rumba… This mix of Afro-Hispanic cultures and, of course, dream beaches and the legendary fiesta at the Cubana. Big favorite also for Havana and its preserved colonial district classified by Unesco, the Varadero: the mini Ibiza of Cuba at nightfall …

– Miami: The mythical city of the Sunshine State is often called superficial or “city of retirees” … Far from it! Miami is actually a vibrant city with multiple neighborhoods just as endearing as each other. South Beach and its colorful Art Deco district lined with pretty beaches, Coral Gables and its amazing Mediterranean architecture, there is also the mythical hotel Le Biltmore (my favorite), Little Havana and its Cuban culture, Little Haiti where we speak mainly French, and then Wynwood, the neighborhood where street art is king with hundreds of sublime frescoes made by the best artists of the moment like Obey aka Shepard Fairey, to mention him.

Are there places you’ve come back from transformed? And why?

SH-D: Without hesitation: India. I went there, alone, and for the first time in 2010. It was part of a business trip to write the Guide Petit Futé ‘Northern India’. I was there for two months. Before I left, I was quite anxious… As a woman travelling alone, I was particularly afraid of running into problems or getting sick. Once there, all these ideas were swept away! It was a memorable report. I was very touched by the kindness, spontaneity and simplicity of the Indians vis-à-vis the tourists. Their civilization is millennia old and I have been a passion for the gods and goddesses of Hinduism. So many grand temples everywhere! As for the Taj Mahal… a splendor to take your breath away!

There are also all these charming cities like Calcutta and Darjeeling, two destinations not to be missed! But the real ‘transformation’, I experienced it in Benares (also called Varanasi): sitting on the banks of the Ganges, I witnessed the departure of funeral pyres on the water (religious rituals of cremation). The remains leave to their final resting place and it was not scary, it was a ceremony both beautiful and moving. The Indians have another relationship to death, they believe in reincarnation which makes this moment less tragic. A remarkable experience that completely changed my outlook on death… And was

An ultimate journey to make?

SH-D: I would say Indonesia, because this huge country, with thousands of islands, is still largely unknown. With its prodigious nature, its multiple cultures and all its ethnicities, it takes several lives to visit it. And I love the Indonesian gastronomy I discovered at the Jakarta Bali restaurant in Paris! Since then I want to taste all the Indonesian dishes across the country and I think this cuisine deserves to be known. It can even become as trendy as Japanese or Korean cuisine! And then, Philippe Robichon, who hosts with me radio show The World of Saliha on Beur Fm , is a passionate Indonesia and he passed on to me his unconditional love for this country. There are encounters that transform you while you are still, that’s how real journeys begin.

Where do you give us an appointment this summer?